This is the sixth and final part of our free ASVAB Math Study Guide. It covers geometry basics including area, volume, quadrilaterals, angles, triangles, and circles. There will always be some geometry questions on the ASVAB, so don’t skip this lesson. At the bottom of the page there is geometry review quiz to test your knowledge of these concepts.

Area of a Rectangle

It makes no difference which side is labeled as length and which is labeled as width as long as they are not directly across from each other.

Find the area of the rectangle shown below: Let’s treat the 7 cm side as the Length and the 4 cm as the Width.

Volume of a Rectangular Prism

Rectangular Prism is the official geometric name for a 3D solid shaped like a brick.

It makes no difference which sides are labeled as length, width, and height as long as they represent the three different sides of the solid.

Find the volume of the rectangular prism shown below: Just another name for a 90° angle.

So special that it gets its own symbol: 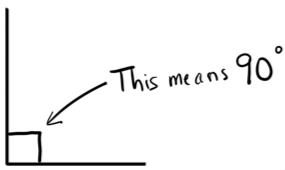 Complementary Angles are two adjacent (“next to each other”) angles which sum to 90°.

Supplementary Angles are two adjacent angles which sum to 180°. In the figure above, we can see that the two solid segments form a right angle, meaning that the angle between them is 90°. We can see that: In the figure above, we can see that the two angles are both adjacent and supplementary – they are supplementary since they are formed by intersecting lines.

Angles in a Triangle

Find the missing angle in the triangle below.

We know that the interior angles of every triangle sum to 180°:

Equilateral (“equal sides”): All three sides of the triangle will be congruent (identical); all three interior angles will be 60°.

Isosceles (“Same legs”): Two sides of the triangle will be congruent; the angles opposite the two congruent sides, called base angles, will also be congruent.

If any of the three interior angles in a triangle is 90°, the triangle is called a “Right Triangle” because it contains a “right” (90°) angle.

The side opposite (directly across from) the 90° is called the hypotenuse; the other two sides are called legs. Pythagorean Theorem: Applies only to right triangles and says that $a^2 + b^2 = c^2$, where $a$ and $b$ represent the lengths of each of the legs and $c$ represents the length of the hypotenuse.

Example: Find the missing side in the triangle shown below.

We know this is a right triangle because of the right angle symbol used in the illustration. This means we are able to use the Pythagorean Theorem.

After subtracting $9$ from both sides:

45-45-90 Triangles: Another special right triangle where the interior angles are 45°, 45°, and 90°. Because the base angles are the same, this is also an isosceles triangle. The side lengths will always be in the same proportions as shown.

Acute: All three of the interior angles in the triangle are less than 90°.

Obtuse: One of the three interior angles in the triangle is greater than 90°.

Area of a Triangle

The area of a triangle is always half the area of the smallest rectangle (or parallelogram) it would take to enclose it.

Typically the equation is written as $\text{Area} = \frac{1}{2} \cdot b \cdot h$, where $b$ represents the base and $h$ the height (the distance measured perpendicularly from the base to the opposite vertex).

Example: Find the area of the triangle shown.

Angles in a Quadrilateral

The interior angles of a quadrilateral will always sum to 360°.

A special type of quadrilateral where each pair of opposite sides is parallel. The parallel symbol is typically illustrated as a filled-in triangle(s) on each of the parallel sides. Opposite sides of a parallelogram are always congruent (same length).

Area of a Parallelogram

Example: Find the area of the figure shown. A special type of parallelogram where any (and all) of the interior angles are 90°.

Area and Perimeter of a Rectangle

$\text{Area} = b \cdot h$ (just like a parallelogram), but since rectangles are so common, the area formula is more often written:

Perimeter is simply the distance around an object. It can be thought of as “How far you would have to walk if you traveled along the border of the shape.”

Example: Find the area and perimeter of the rectangle shown below. Radius, r, is the distance from the center of a circle to a point on the circle.

Diameter, D, is the distance from one side of the circle to the other passing through the center; it is always two times the radius. Circumference of a Circle

As mentioned above, the circumference of a circle is the distance around the circle. It is no different than the perimeter, but circles are special enough that the perimeter of a circle gets its own name.

Since Diameter is two times the Radius, we can also use the following equation (which is the one you will most likely recognize):

Area of a Circle

Example: Find the Circumference and Area of the circle below. Now that you’ve read more of our lessons and tips for the Mathematics section of the ASVAB, put your skills to practice with the review quiz below. Try not to reference the above information and treat the questions like a real test.

What is the area of a rectangle with a width of $6$ inches and a length of $8$ inches?

What is the volume of a rectangular prism with the following measurements:

Question 3 Explanation:
Complimentary angles add to $90°$. $x$ can be solved for with simple algebra:

Subtract $36$ from both sides

Question 4 Explanation:
Supplementary angles add up to $180°$. $x$ can be found through simple algebra:

Subtract $85$ from both sides

Subtract $75$ from both sides

In a right triangle, one acute angle has a value of $25°$. What is the value of the other acute angle?

Question 6 Explanation:
The problem tells us that the triangle is a right triangle, meaning that one angle has to be $90°$. Knowing that there are $3$ angles in a triangle and they all add up to $180°$, we can solve the problem with algebra:

Subtract $115$ from both sides

In a right triangle, two legs measure $5$ cm and $12$ cm. What is the length of the hypotenuse?

Question 7 Explanation:
This problem can be solved using the Pythagorean Theorem, $a^2 + b^2 = c^2$. We know that $a$ and $b$ represent the legs and $c$ represents the hypotenuse, so we can plug in the numbers given in the problem and solve for $c$.

The length of the hypotenuse is $13$ cm.

Question 8 Explanation:
A parallelogram's area is found by multiplying the base by the height. in this case, it's $6 \cdot 3$, which is $18 \text{ inches}^2$. The "side length" is not needed to solve the problem.

A circle has a radius of $3$. What is its approximate circumference?

Question 9 Explanation:
A circle's radius is found by multiplying pi ($π$) by the diameter. The diameter is twice the radius, so we know it equals $6$. We can use $3.14$ as a simplified version of pi.

A circle has a diameter of $14$. What is its approximate area?

Question 10 Explanation:
The area of a circle is found with the equation $π \cdot r^2$. We are given the diameter, which is double the radius; the radius for the circle is $7$. We can now plug in what we know and solve for the area:

With rounding, the area of the circle is $153.9 \text{ units}^2$.
Once you are finished, click the button below. Any items you have not completed will be marked incorrect. Get Results
There are 10 questions to complete.
Return
Shaded items are complete.
Return
You have completed
questions
question
Your score is
Correct
Wrong
Partial-Credit
You have not finished your quiz. If you leave this page, your progress will be lost.
Correct Answer
You Selected
Not Attempted
Final Score on Quiz
Attempted Questions Correct
Attempted Questions Wrong
Questions Not Attempted
Total Questions on Quiz
Question Details
Results
Date
Score
Hint
Time allowed
minutes
seconds
Time used
Answer Choice(s) Selected
Question Text
All done
Need More Practice!
Keep Trying!
Not Bad!
Good Work!
Perfect!