This is the second part of our free ASVAB Science Study Guide. This part covers biology and life science. Be sure to read through the material carefully and study the diagrams as well. At the bottom of the page there is a review quiz to assess what you’ve learned about biology.

All living things need energy to survive. If an organism is able to produce its own energy, it is called a producer. Plants use sunlight to make food, so they are considered producers.

If an organism cannot make its own food, it needs to eat other organisms. These organisms are called consumers. Consumers are divided into four groups:

Energy flows in ecosystems as producers use the sun’s energy to make food, and then the producers are eaten by consumers. This flow of energy can be documented in several ways:

Food chains show the linear flow of energy through organisms.

Food webs more accurately depict the flow of energy through an ecosystem, because they show the numerous ways organisms obtain their food. With a food web the arrow indicates the direction of energy flowing through the system. In the food web below, the hawk eats the rabbit, so the energy from the rabbit flows to the hawk. Energy pyramids show how energy (in the form of food) is lost as it is transferred through organisms in an ecosystem. The amount of available energy is reduced as energy moves to a higher level (trophic level) because organisms use most of their consumed food to live. 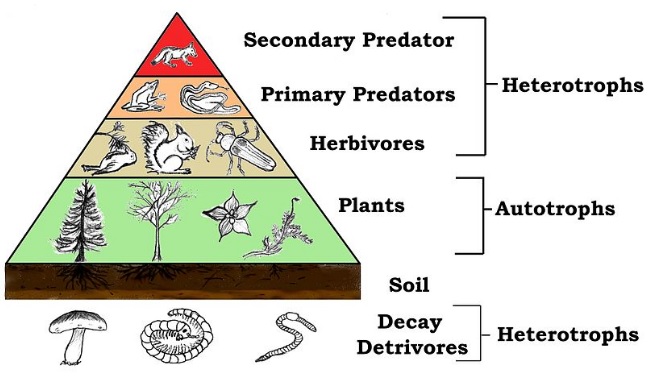 The human body is organized into 11 major organ systems. These are the systems that you are most likely to be asked about on the  ASVAB Science test:

Muscular System: Includes all the muscles that move the bones and their connective tissue.

Respiratory System: Consists of the nose, pharynx, larynx, trachea, bronchi and lungs. The job of the respiratory system is respiration, or breathing, which is the process by which oxygen is obtained and carbon dioxide (the produce of respiration) is released.

Circulatory System: Responsible for transporting materials to and from the cells. It consists of blood cells and platelets, the heart, and blood vessels (arteries, capillaries and veins).

Digestive System: Works to digest food so that it can be used by the body. It consists of the digestive tract, which is a series of organs that are joined together. The organs of the digestive tract include the mouth, throat, esophagus, stomach, small intestine, large intestine, rectum and anus. The digestive system has several glands associated with it to aid in digestion: liver, gallbladder, pancreas, and salivary glands.

Nervous System: Gathers and interprets information from the body’s internal and external environments, and responds to the information. It allows humans to speak, smell, taste, hear, see, move, think and experience emotions. The nervous system includes the brain, nerves, and spinal cord.

Genetics is the study of how hereditary information is passed from one generation of organisms to their offspring.

Gregor Mendel is known as the “Father of Genetics.” He worked in a monastery garden in the 1800s, and studied how pea plants passed traits on to their offspring. In doing so, he bred various pea plants and recorded the traits of their offspring. His results led him to the discovery that each plant contained two sets of instructions for each characteristic. Each parent plant donates one set of these instructions to the offspring.

Since cells carry two copies of each chromosome, they have two versions of each gene. Different versions of genes are called alleles. An allele can be dominant or recessive.

Recessive alleles will show their effect only if the person has two copies of that particular allele. For example, the allele for blue eyes is recessive. So if someone has two alleles for blue eyes, their eyes will be blue. A person who has two of the same alleles of a particular gene is described as homozygous.

How to Solve Punnett Squares:

A common genetics problem on the ASVAB requires you to figure out the probability of an offspring having a particular genotype. These problems can be solved by using a Punnett square.

The two alleles for a particular gene are known as the genotype, and can be represented with letters. A capital letter is used for the dominant allele and a lowercase letter is used for the recessive allele. For an example we will review an experiment that involves crossing two pea plants. Pea plants can have rounded seeds or wrinkled seeds. Round seeds are dominant to wrinkled, so round seeds will be represented by a capital R. Wrinkled seeds are recessive and will be represented by a lowercase r. Here are the possible combinations:

Here is the completed Punnett square: 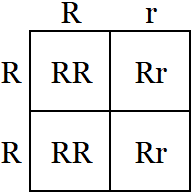 Now that you’ve read more of our lessons and tips for the Science section of the ASVAB, put your skills to practice with the review quiz below. Try not to reference the above information and treat the questions like a real test.

What is the difference between a producer and a consumer?

Question 1 Explanation:
A producer is an organism that can produce its own energy, like how plants use sunlight and water in photosynthesis to make food.

A consumer must consume other organisms for energy, like how humans eat plants and meat for sustenance.

Question 2 Explanation:
An omnivore is a creature that uses both plants and animals for food. Humans are generally considered omnivores.

Available energy is ______ as it moves up to higher trophic levels in an energy pyramid.

Question 3 Explanation:
Because organisms use energy in their food to live, available energy is reduced as it moves up the energy pyramid.

What bodily system gathers, interprets, and responds to information from both internal and external environments, and allows us to use emotions and the 5 senses?

Question 4 Explanation:
The nervous system, which includes the brain, spinal cord, and nerves, is responsible for gathering, interpreting, and responding to information from internal and external stimuli.

The circulatory system is responsible for:

Question 5 Explanation:
The main job of the circulatory system is transporting materials to and from cells. This system includes blood cells and platelets, the heart, and blood vessels.

The respiratory system is consists of:

Question 6 Explanation:
The respiratory system, which is responsible for breathing, is made up of the nose, pharynx, larynx, trachea, bronchi and lungs.

Different versions of the same gene are called

Question 7 Explanation:
Alleles are different versions of a gene. There are dominant and recessive alleles.

A heterozygous plant will display the traits of the

Question 8 Explanation:
Heterozygous means that a plant is carrying both a dominant and a recessive allele. When both are carried, the dominant allele is the one that will show.

Based on the following punnet square, what are the odds of having a homozygous dominant offspring?

Question 9 Explanation:
When filling in the punnet square, you will notice that two sections should be filled in as "RR". This means that 2/4 squares predict a homozygous dominant offspring, which is the same as 50%.

Based on the following punnet square, what are the odds of having a homozygous recessive offspring?

Question 10 Explanation:
A homozygous recessive plant would have the genes "rr". When mentally filling in the punnet square, you will notice that every square will have at least one dominant gene, or "R". Thus, there is no chance that the plant will be homozygous recessive, so the odds are 0%.
Once you are finished, click the button below. Any items you have not completed will be marked incorrect. Get Results
There are 10 questions to complete.
Return
Shaded items are complete.
Return
You have completed
questions
question
Your score is
Correct
Wrong
Partial-Credit
You have not finished your quiz. If you leave this page, your progress will be lost.
Correct Answer
You Selected
Not Attempted
Final Score on Quiz
Attempted Questions Correct
Attempted Questions Wrong
Questions Not Attempted
Total Questions on Quiz
Question Details
Results
Date
Score
Hint
Time allowed
minutes
seconds
Time used
Answer Choice(s) Selected
Question Text
All done
Need more practice!
Keep trying!
Not bad!
Good work!
Perfect!